DTC continues to celebrate the amazing people, performances, and memories that have helped sustain and grow this wonderful community theatre group over the past 35 years. In today’s installment of Celebrating 35 Years … A Look Back, we remember the mid 1990s and hear from some people who, when they were becoming involved with DTC as children in that decade, probably had little idea the influence DTC would have on them as adults.

Few people so completely represent the promise of DTC to make such a positive, lasting impact as much as Stephanie Miller. Stephanie is now an accomplished music and second grade teacher with Montgomery County Public Schools, but the first musical she ever saw live was DTC’s production of The Music Man in 1990.  She loved the experience so much that she sat in the back row and sang every song behind the rest of the audience (and would like to apologize to anyone reading this who was also in the audience that night).

As she began to recognize her musical theatre talent, Stephanie auditioned for DTC’s Fiddler on the Roof in 1995, where she was cast – by DTC director and board member Shelly Horn – as The Fiddler, a role that showed off her dancing chops. Like many other DTC children who ultimately return to shows as an adult, she remembers her Fiddler experience for the opportunity to perform with her mother and father as fellow cast members. Stephanie performed in three more DTC shows during the 1990s, including The Pajama Game (Ensemble), Brigadoon (Jean), and How to Succeed in Business Without Really Trying (Rosemary). When she wasn’t performing onstage, she worked on choreography for a few productions and, quite impressively for a high school student, choreographed Joseph and the Amazing Technicolor Dreamcoat. 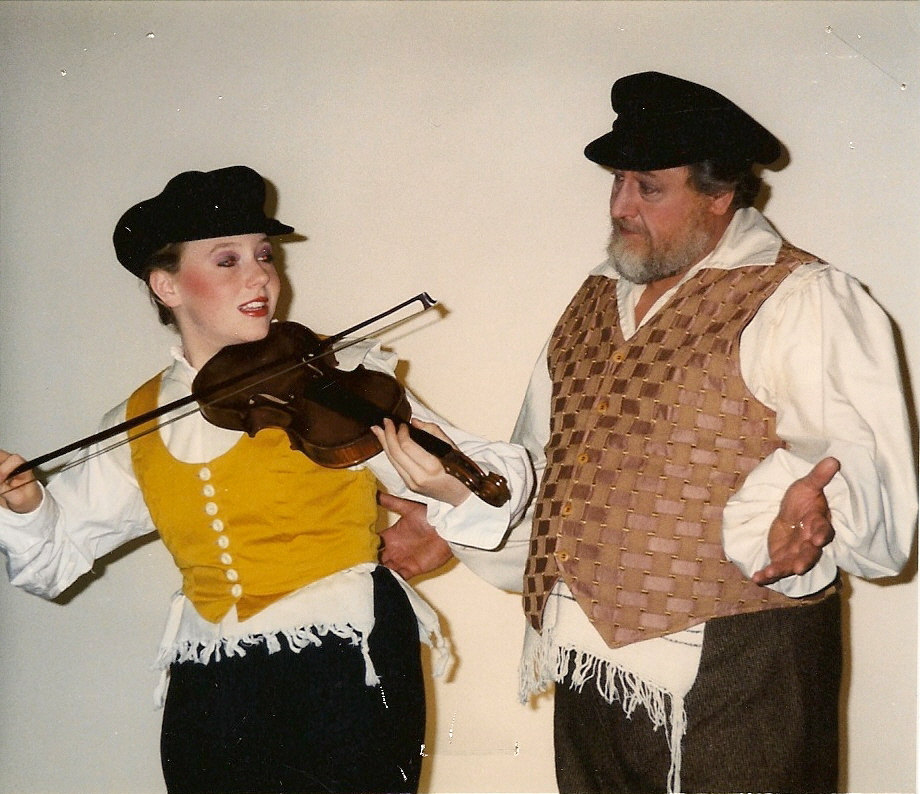 Stephanie Miller and the late Gary Carl Fackenthall in Fiddler on the Roof, 1993 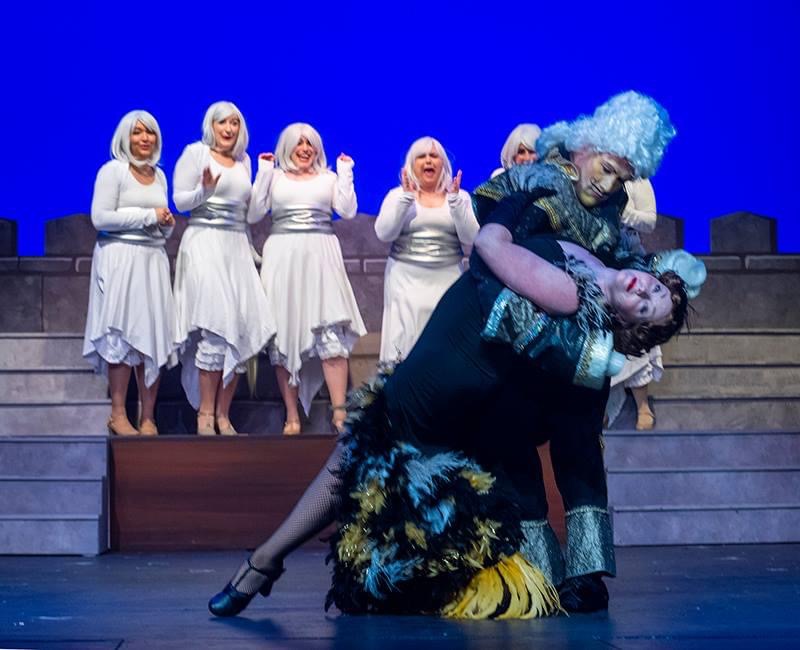 Stephanie Miller as Babette in Disney’s Beauty and the Beast, 2018

Stephanie believes that DTC played a huge part in her formative years, helping to shape her as a person and guiding her towards her career. To her, DTC feels like “home,” which may be because living with her in her home is her husband David Robinson, whom she met while the choreographer for DTC’s 2001 production of Oklahoma. In fact, Shelly, also the director of Oklahoma, married them.

Stephanie still performs with DTC, and you may have seen her most recently as Babette in 2018’s Beauty and the Beast (alongside David who played the role of The Beast). From influencing her childhood interests, to shaping her career direction, to introducing her to her husband, Stephanie is a shining example of why DTC must stay around for another 35 years!

When people think of DTC now, the name Megan May McNellage likely comes to mind. Not only is she the current DTC President, she has also been one of the major creative forces behind DTC’s recent successes, bringing her acting, assistant directing, and choreography talents to many of DTC’s productions over the past 13 years. What readers may not know is that the May family, including her mom Peggy and three siblings, have been involved in the theatre since the mid 1990s.

Just like Stephanie, Megan’s first DTC audition was for 1995’s Fiddler! Seven-year-old Megan was not cast in the show, but she persevered and found a way to stay involved, helping her mom sell concessions. It wasn’t long before she started performing in each show. Megan fondly remembers her time in her first “big DTC fall musical”, which was 1999’s Oliver, directed by Ron Stalbaum. Playing a child pickpocket, she recalls sneaking around the audience “stealing” candy from purses planted by ensemble members. She and the rest of the pickpockets even got to keep the candy after the show, which was undoubtedly a great way for DTC to retain young talent!

Candy aside, Oliver was very special to Megan for a few other reasons. She recalls how kind the adults in the cast were to her and the other children, and how she was taught skills like learning her role, using stage makeup, and figuring out where to go and when to be ready for her stage entrances. Clearly Megan paid attention, as she imparts this same wisdom now as director and choreographer of DTC Kids. Megan made her directorial debut with last year’s The Best Christmas Pageant Ever. Oliver also introduced her to lifelong cast friends, including a boy whose best friend (Bryndon McNellage) she would go on to marry!

Megan McNellage as a Guppy in Breakfast With Santa, 1996. 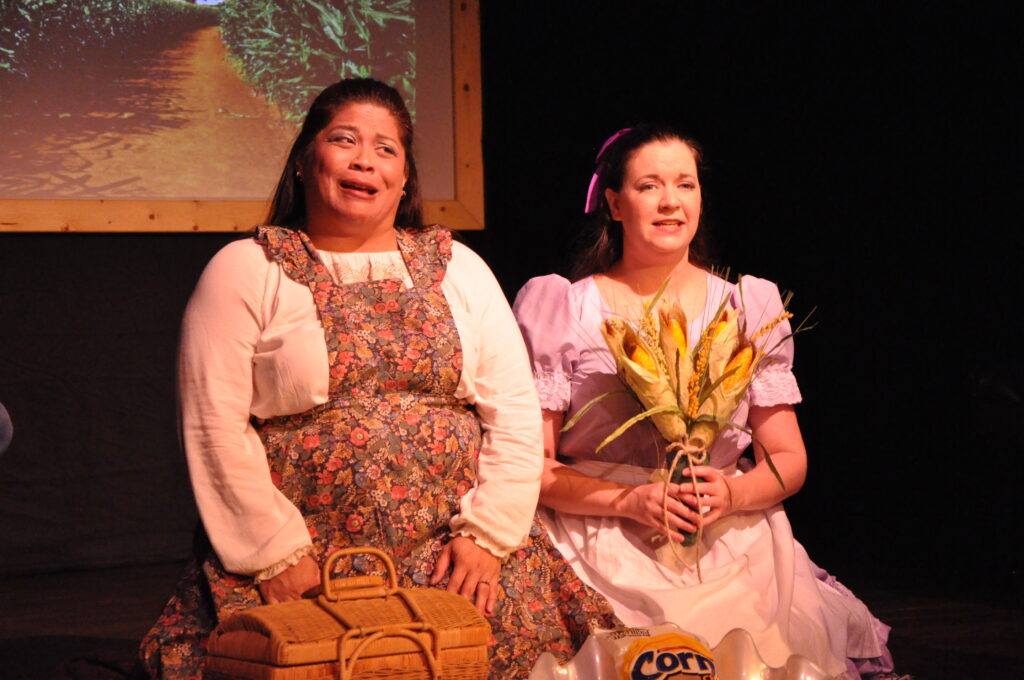 Over the years, Megan’s siblings often performed alongside her in musicals and her mom co-produced many of these DTC shows. Her father Ray dutifully attended shows over the years and also hosted a few cast parties at a restaurant, Mrs. O’Leary’s, the family operated in Gaithersburg.

DTC has been around for 35 years, and this is Megan’s 25th DTC anniversary. Due to the pandemic, her first year as DTC President has been challenging. Megan considers DTC to be her people, and knows that no matter what challenges come our way over these next few months, DTC will always be a safe, inviting environment for children and adults alike to come together, make wonderful art, and create lasting memories.

DTC is always looking for new families to join the membership and participate both on stage and back stage. Join us!